I mentioned in my last post that I had to rip out part of the jacket I’m working on. Here’s the main reason why: the underarm of the sleeve was looking wonky. To shape the sleeves, I increased that section until it reached 7.5″, then I crocheted about 8.5″ of stitches and then joined to the body. The result was a bunch of fabric hanging out under the arm.

I think I should have increased my sleeve to 14″ to get a 7″ diameter, and then chained a few stitches for underarm ease, and then joined.

With that said, I had to rip out. I could finish it, and I knew S. would wear it, but it would become a franken-jacket, and I ultimately want to make S. something that he’ll wear all the time.

Here’s an auxiliary reason why I wanted to rip out anyway: the fabric was bubbling where I was increasing the front panel, but not the sleeve. 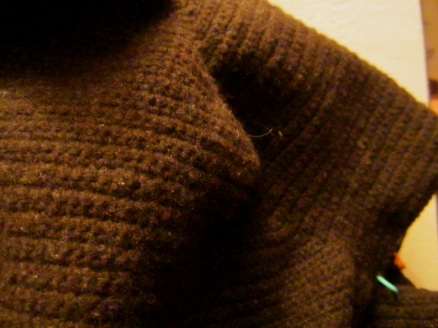 Fellow crocheters, do you know why it’s bubbling up? My theories are:

This is my first time really ripping out a chunk of a project. All that work. Ripped out.

On the bright side, I get to work with this yarn for a longer time, which also makes my bank account happy.

And if this mistake was caused by crocheting an equal number of stitches instead of chaining a few and then joining, I’ll probably never make this mistake again.

Or as Bob Ross would have put it, I won’t make this happy accident again.

Here’s how much I had to rip out and rewind:

And because I’m also trying to learn German, the first paragraph roughly translated to German:

I welcome any fixes to my German, by the way. 🙂